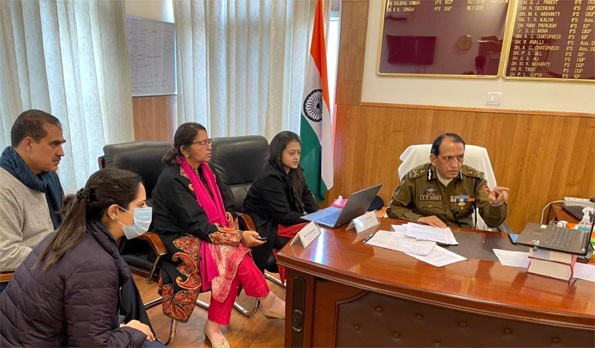 Jammu – J&K, January 15th 2021: BPR&D, Ministry of Home Affairs, Government of India organized a webinar on ‘Mental Health issues in Prisons Inmates’ today during which DGP, Prisons, J&K-V. K. Singh, IPS, spoke on the topic ‘Insomnia in Prison Inmates’. The webinar was attended by DsG/IsG Prisons of other States/UTs.

The webinar was held in response to a report shared by DGP, Prisons, J&K regarding insomnia in inmates & CBT-I at District Jail Jammu. Prof. (Dr) Arti Bakhshi, Head Department of Psychology, Jammu University & Dr. Piyali Arora, Assistant Professor, Clinical Psychologist, Government College for Women, Parade, Jammu were also present during the webinar who were co-opted as resource persons in conducting the sessions at District Jail Jammu.

During this webinar DGP, Prisons emphasized that at the core of Prison administration is Correctional service which seeks to reform the inmate and enables them to re-integrate as healthy adults within the community on release. Accordingly, a need was felt to address sleep problems for better reformation of inmates which led to planning and implementation of this intervention. Sleep problems affect the heath of inmates adversely and long-term sleep problems among inmates may lead to memory issues, poor concentration, weak immune system, susceptibility to diabetes, depression, anxiety, suicide ideation etc., which in turn create an extra burden on the system and pose serious challenges in corrections.

The faculty of JU and GCW Parade stated that earlier a study had been conducted by the University of Manchester, UK in 2016 which had concluded that Insomnia Disorder and poor sleep quality were common in adult English prisoners and the findings emphasised the need for dedicated treatment pathways to improve screening, assessment and treatment of insomnia in prisons. Previous studies had identified risk factors for insomnia to include increased age, psychiatric disorders (eg depression, anxiety, personality disorders), physical ill-health, stressful events, prescription medication and substance abuse. Prisoners have a higher prevalence of most of these precipitating factors compared to the general population. In addition, the prison regime and environment may further interfere with the sleep-wake cycle due to the interruption of usual daily routines, and lack of personal autonomy etc. Lack of control over physical environment is also likely to cause further disturbance.

© All Rights Reserved. Powered by : JKians